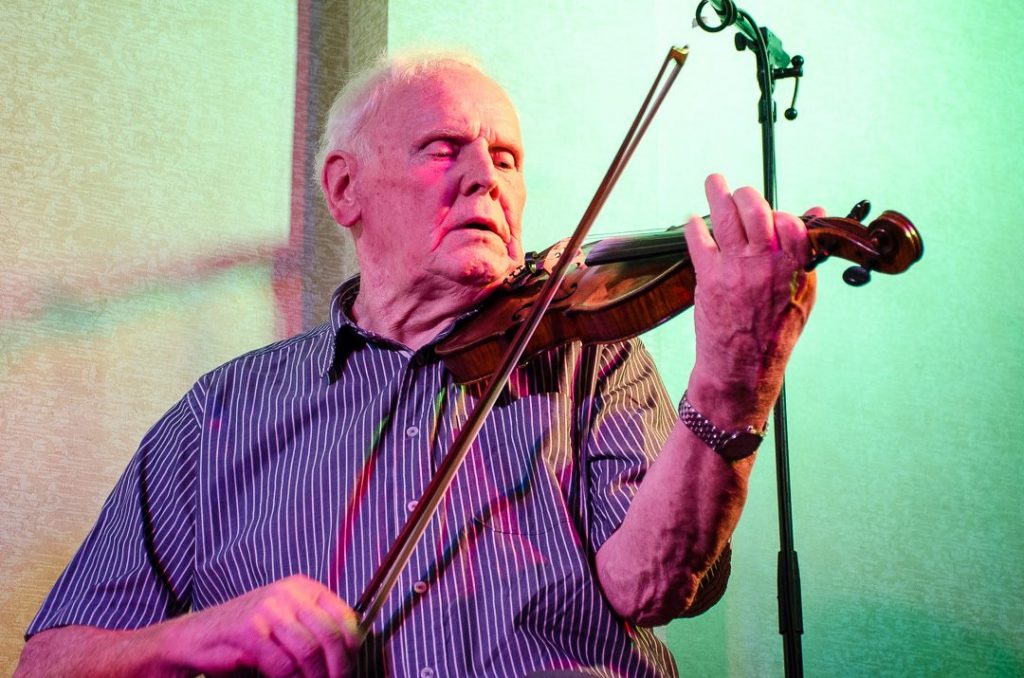 John Dwyer’s own musical story spans across many decades and his absolute passion for traditional music was passed down from generation to generation, literally, from father to son.

John was brought up on the stories of his own family’s musical heritage. One notable story was that his father , John Snr, met Liam Walsh, the great Waterford piper during his incarceration at Spike Island in 1921. Musicians were allowed to play without any constraints during their imprisonment and John Snr spent his time learning and playing as much as possible with musicians like Liam Walsh. The tune “The Spike Island Lassies” is an ode to that time and John’s father was purported to have played in a style similar to the East Galway fiddle player, Paddy Kelly.

John Dwyer Snr. was also a well respected singer in his home area and both he and his wife, Kathleen, played the accordion. Born in Caolrua, between Eyeries and Argroom, on the Beara Peninsula, John, together with his siblings, was as musical as his parents and his brother Richard and late brothers Michael and Finbarr have all been well regarded as musicians and composers in their own right. John was already composing by his teens; having played through every tune available in his father’s precious Captain O Neill’s collection. Once John had learnt everything he could from the collection, he turned to further developing his musical knowledge through composition.

The Rebirth of Irish Traditional Music

On joining the Garda Siochana in 1955, John brought his love for traditional music to Dublin. He was a regular at the Church Street and Pipers Club and spoke about the many good times had in Booterstown which later became the Monkstown Branch of Comhaltas Ceoltoiri Eireann. John was influenced by the outstanding musicians of that time; Tommy Potts, John Kelly, Sonny Brogan, Bill Harte, John Clarke, Joe Liddy and many more. He was a member of the Shannonside Ceili Band in the 50s and later the famous Castle Ceili Band. He always spoke warmly of Mick O’ Connor, flute player, and his musician friends from that period. The 1950s and 60s were a real time of transformation and rebirth for Irish traditional music and John felt very much a part of this vibrant scene.

In 1972 John was also Chairman of the Waterford County Board of Comhaltas Ceoltoirí Éireann and, in essence, John’s real legacy was his ability to add his love of the music to any session around the country and engender his innate passion for traditional Irish music across many generations of musicians and music lovers.

He lifted any traditional scene he was involved with and on different days, he could be found playing in good company in Bannow, Duncannon, New Ross, Waterford, Kilkenny, Carlow, Kenmare, Allihies, Ardgroom, Castletownbere, Bantry, Ennis, An Rinn, Cork, Dublin, Miltown Malbay, Fiorano, Brittany. Wherever there were a few friends and a decent session taking place, John would be there. John was very much a happy minstrel, and he didn’t think twice about driving across the country for a good session. We have, together with his musician friends, many happy memories of sessions playing into the night with the quality of playing matched, in turn, by the high coloured tones of sociable chatter from every age and walk of life.

John genuinely loved the “craic” and for someone who never had the inclination to drink alcohol, he certainly knew his way around the pub traditional scene in many towns! John was a truly passionate composer and he was always encouraged by upcoming composers. John was always happy to share his rich understanding of the tradition along with the folklore and history that raised him. John may have been better known as an accomplished fiddle player but he could also be found playing on a tin whistle during a quiet moment in his car and like his brothers, he also played the accordion and started one or two fine musicians from the Waterford area on this instrument.

Following a short illness, John passed away in August 2020. He had hoped to record some of his newer compositions and thankfully we’re privileged to have a copy of his original compositions along with some of his notes and updates. He sometimes woke up with a tune running around in his head and he kept a manuscript beside his bed to make sure that he could “capture” the tune before it was lost.

We are privileged to have had someone as magical and loving as John for our father. His world of music enriched our lives as children growing up and we thought our musical journey with him would never end. I know his family, friends, musicians, composers, and basically anyone who knew John would agree that his quiet, sometimes shy but always modest, creative energy would light up the tunes he played and breathe life into the culture and history he revered and cherished.

May his wonderful music continue to be enjoyed and shared for many years to come!

We use cookies on our website to give you the most relevant experience by remembering your preferences and repeat visits. By clicking “Accept All”, you consent to the use of ALL the cookies. However, you may visit "Cookie Settings" to provide a controlled consent.
Cookie SettingsAccept All
Manage consent

This website uses cookies to improve your experience while you navigate through the website. Out of these, the cookies that are categorized as necessary are stored on your browser as they are essential for the working of basic functionalities of the website. We also use third-party cookies that help us analyze and understand how you use this website. These cookies will be stored in your browser only with your consent. You also have the option to opt-out of these cookies. But opting out of some of these cookies may affect your browsing experience.
Necessary Always Enabled
Necessary cookies are absolutely essential for the website to function properly. These cookies ensure basic functionalities and security features of the website, anonymously.
Functional
Functional cookies help to perform certain functionalities like sharing the content of the website on social media platforms, collect feedbacks, and other third-party features.
Performance
Performance cookies are used to understand and analyze the key performance indexes of the website which helps in delivering a better user experience for the visitors.
Analytics
Analytical cookies are used to understand how visitors interact with the website. These cookies help provide information on metrics the number of visitors, bounce rate, traffic source, etc.
Advertisement
Advertisement cookies are used to provide visitors with relevant ads and marketing campaigns. These cookies track visitors across websites and collect information to provide customized ads.
Others
Other uncategorized cookies are those that are being analyzed and have not been classified into a category as yet.
SAVE & ACCEPT